The closest one is in Atlanta. Since we were driving through there, I begged pleaded and promised all sorts of crazy things (clean the laundry room? Really??) if we could stop by TJ’s. After trusting the stupid ridiculous Google map after the latest iOS upgrade, we wound up in some industrial park. After typing and searching, I finally found another one that would be right off of I-285 and in the direction we were going. After weaving through construction lane closures, knocking over a couple of cones, and singing the praises of the nice U-Haul guy who let us cut in front of him so we would stop slinging cones everywhere, I finally got my first view of the famous Trader Joe’s.

My first reaction? After drooling over the flowers, I came to the gluten-free bread and saw the price tag. Surely, that was mistake. It couldn’t be $2.00 cheaper than….. 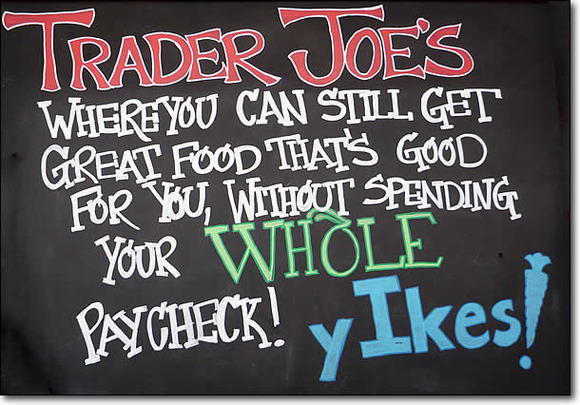 Sweet baby Moses. The Peanut butter was just plain peanuts with no salt and $3.00 cheaper. The frozen food section had me in grateful tears. It was more clean convenience food. I keep frozen food handy for those nights when PTO goes late, workouts are late, I take a 2 hour nap like a zombie, etc. These don’t happen often, but it sure beats going through the drive through like I used to do. TJ’s had a large variety of frozen veggies, rice, pasta, already seasoned meat, etc. And the prices were so much better than I thought.

But let’s get down to the real deal—chocolate and coffee.

That is how Stephen became a believer.

He loves healthy food. Loves it. He grew up with garden vegetables, fresh caught and cleaned venison and fish, and little sugar or additives. His mother was way ahead of the current trend for clean food. But, he’s also aware that while my paycheck is steady, his is not.  He’s work in the Environmental department of a large steel company. When steel is rolling, he’s making great money, and we put a lot of that in savings. But when there are no orders for steel, his pay is cut dramatically. We are in some lean months right now and we just blew through some savings to take this fall trip to TN.

I could see the dollar signs in his head when I asked (begged) to stop by TJ’s. He’s very familiar with my Whole Foods budget and is also aware that most GF foods are not cheap. I was also aware of his inner turmoil with wondering if/at what point he would need to reign me in. So far, I had a jar of PB, his bag of peanuts, and some GF hamburger buns. I was looking around for some pumpkin cider when I turned the corner and his expression was priceless! He had a big canister of coffee. He said “Sumatra! and it’s only $5.99!!!”. Before I could say another word, he was grinding those beans.  I walked over to the samples and saw Pumpkin spice coffee. It was much better than the stuff I bought at Publix. Smooth with more “spice”. It was a couple of dollars more than his Sumatra so I put it back down and went back to the soup. As I was looking through boxes of soup, he asked me “Will you still drink it after Halloween”? Well OF COURSE!

We left the store with both canisters of coffee 😉

And now the only question I have left about Trader Joe’s.

How can I wait to get more of these? And I did clean the laundry room. Now I have room for the Swiffer Sweeper Vac I’ve been looking at. I’m a wild woman these days 😉

As someone with several TJ's within a 20 minute drive (including one within a 20 min walk), I promise that I wil get you a pack of the mini PB cups if I get you in the holiday exchange on Runango. ;)

BTW, since the 13th anniversary is the lace and fur fabric anniversary (um, odd combo so perhaps it's the put some spice back in your marriage anniversary?), I got Mr. Bear a container of the dark chocolate almond lace cookies from TJs.