Look for the helpers

What happened last Monday in Boston was not a tragedy. It was not a disaster. It wasn’t an “unfortunate event”.  It was a brutal malicious attack made by terrorists for the purpose of causing as much harm, damage, and loss of life. Why target marathon runners and spectators, there will never be an acceptable answer for me. I have tried to make sense of it. I have tried to come up with possible reasons. I have tried just shoving it down and moving on.

But I’m done with that.

I’m done with Suspect 1 and 2. I don’t care about their rights, or their deaths, or their Miranda readings, the conditions of the surviving, the court battles, or any of that. I don’t want to see the pictures of backpacks and hats and boats and bombs. I don’t care about what happens to them now. Throw one body off a bridge and shove the other one in a pit for all I care. The damage they did is done and I’ve heard enough about them. It matters nothing to me now. They have been found. Good luck finding out anymore information from the surviving terrorist. I’m sure people out there can easily look me in the eye and tell me to forgive and don’t be bitter. Good luck with that, too.

What I do want to hear? Mr. Rogers said it best.

"When I was a boy and I would see scary things in the news, my mother would say to me, "Look for the helpers. You will always find people who are helping." To this day, especially in times of "disaster," I remember my mother’s words and I am always comforted by realizing that there are still so many helpers – so many caring people in this world."

I’m looking for the stories from the ground, the first responders, the people who ran past the finish and kept going to donate blood. I’m reading and re-reading the words from people who were there to witness people with shrapnel in their skin helping those who lost legs. I will never forget Carlos, with his blood-stained flag, fighting to help a man who was in danger of dying from blood loss. I want to hear more about the people who showed up at hospitals to donate so much blood, the hospital turned them away to wait for the supply to go down again. Have you seen the Google doc of people offering their homes/rooms to visitors in Boston who would be stranded for a couple of days? What about the video of the man taking off his belt to use as a tourniquet? The older couple trying to stop massive blood loss with coffee shop napkins. “Normal” people and NFL stars joining together to rescue the injured. The power of Twitter and other social media quickly passing along a Google person finder. And this man, from the video, who fell down, and got up and crossed the line and went to help. 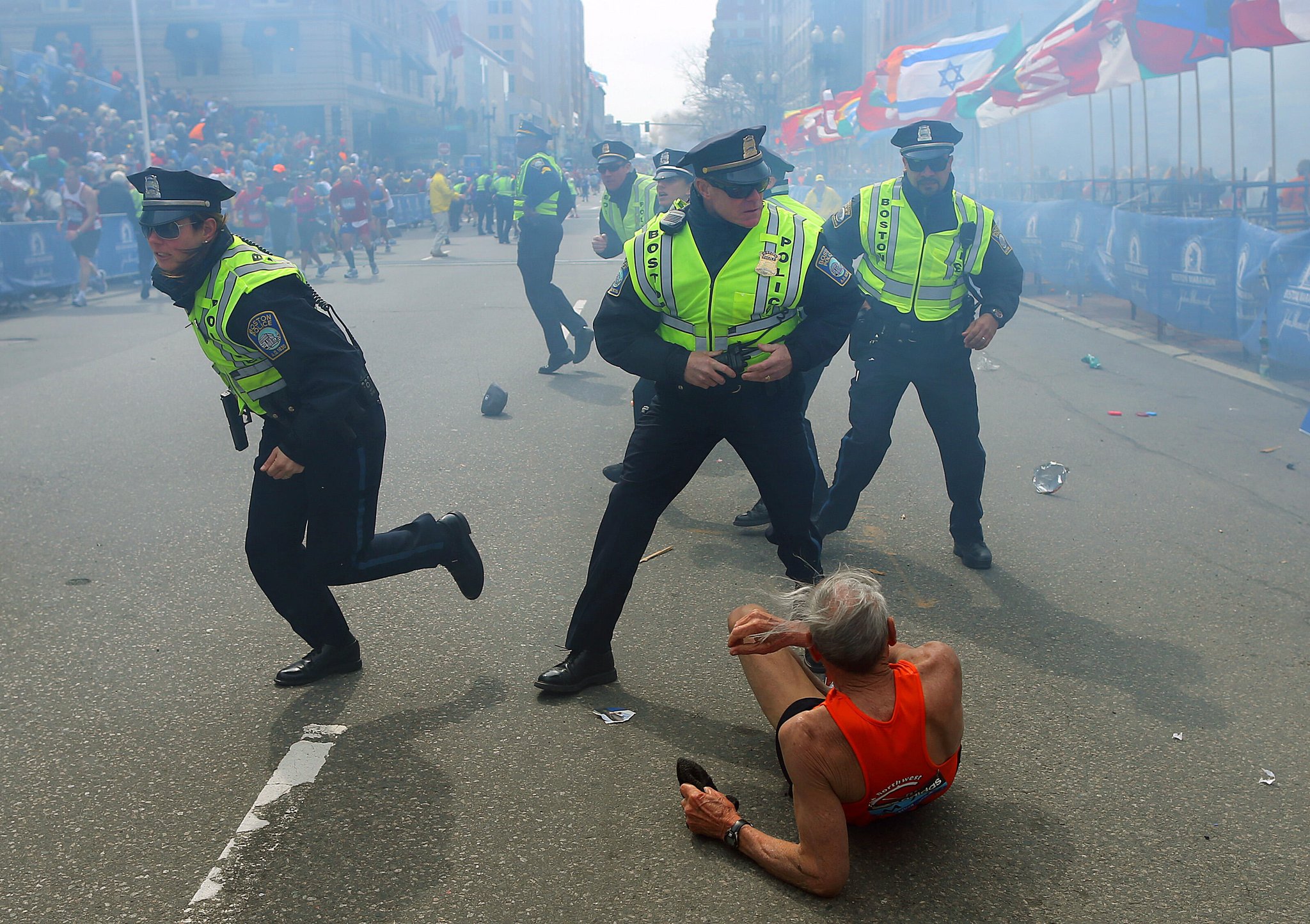 These are the things I want to hear about. I want to hear about the good. That is what will last far longer than the acts of little men or women terrorists. So, spare me the details of upcoming courtroom dramas and the bickering that has already started on both sides of the political lines. I’m ignoring the yammering about bombs and pressure cookers and religion and tea parties. It doesn’t matter. It doesn’t last.

It’s the good that lasts.

The good that lies in the souls of humanity will always destroy the minds of evil.